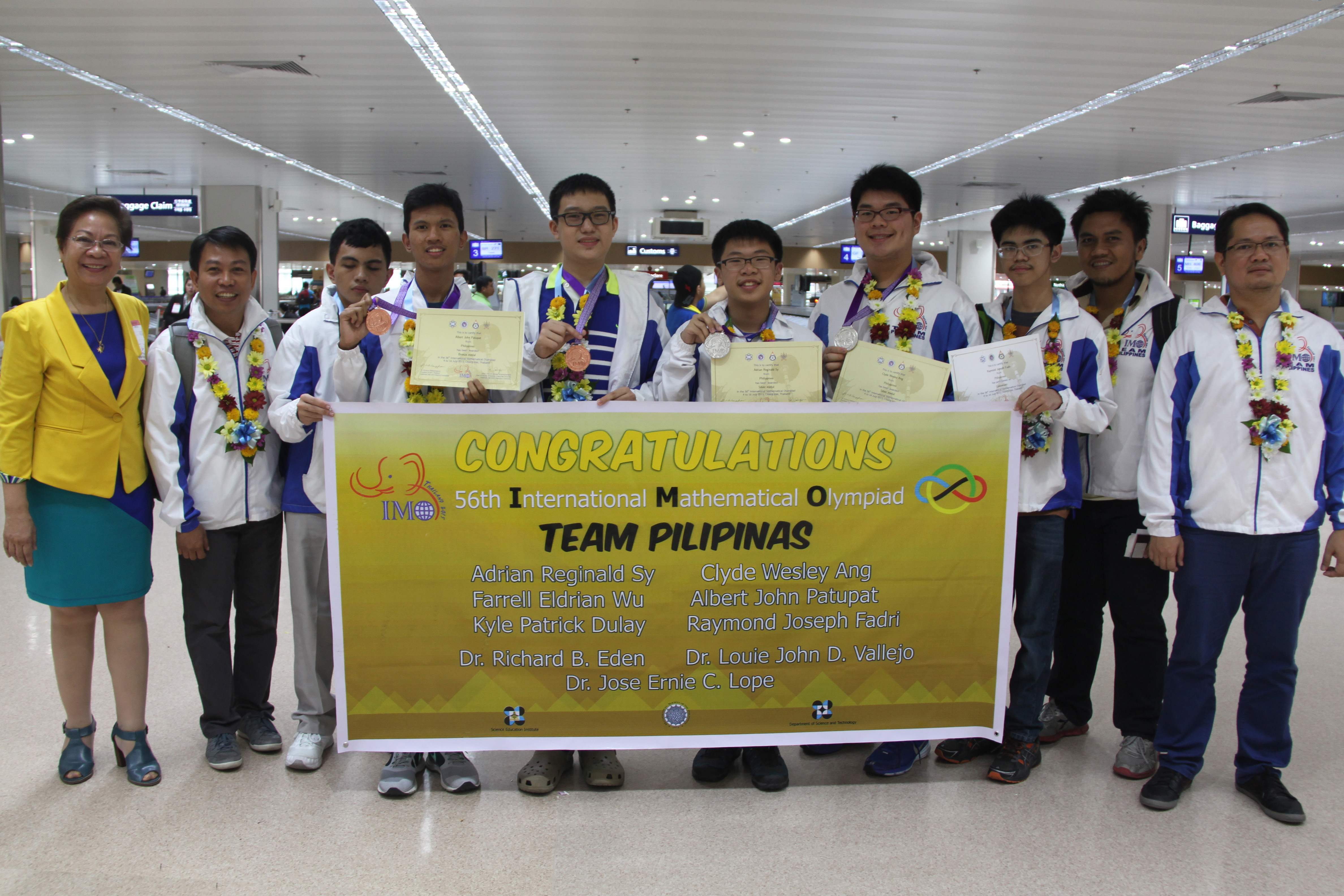 HISTORIC FEAT. This year’s national team to the 56th International Mathematical Olympiad set historic marks as it brought home two silver medals along with two bronzes and an Honourable Mention.

Two silvers, two bronzes, an honourable mention, and a piece of national history.

This, as the Philippine delegation capped the 56th International Mathematical Olympiad (IMO), the hardest and most prestigious math competition in the world, with its best performance since it started competing in 1988.

Adrian Reginald Sy of St. Jude Catholic School and Clyde Wesley Ang of Chiang Kai Shek College scored 21 and 19 points, respectively, to nab two silver medals to lead the winningest team that the country has fielded in the competition. The 56th IMO was held from 4-16 July 2015 in Chiang Mai, Thailand.

Team Leader Dr. Jose Ernie Lope and Deputy Team Leader Louie John Vallejo, both of the Mathematical Society of the Philippines (MSP), guided the national contingent that also fielded Raymond Joseph Fadri of Makati Science High School. The team was selected from the 20 National Finalists of the Philippine Mathematical Olympiad that underwent training in April and May through the Math Olympiad Summer Camp organized by the MSP.

With the victory, the Philippine Team got a total score of 87 and ranked 36 among 104 participating countries. Lope reported that the performance brought the country closer to Southeast Asian powerhouses like Hong Kong (rank 28) and Indonesia (rank 29), and higher than top-mainstays such as Belarus (rank 39) and the Netherlands (rank 43).

The IMO is composed of six problems that the participants solve in two days. Questions come from four subject areas namely geometry, algebra, number theory and combinatorics.  Each problem is worth seven points.

“The six problems appearing at the IMO are certainly very difficult that even the easiest of these is several times harder than the math problems that are usually encountered by high school students,” described Lope, who served as the Team Leader of the national team in the past three years.

Department of Science and Technology - Science Education Institute (DOST-SEI) Director Dr. Josette Biyo said the historic accomplishment did not come as a shock and was simply “a fair testament to what young Filipino math wizards are capable of achieving internationally.”

“I am not surprised that we won given the credentials of the members of our Philippine team. They’re all proven winners and we’re very happy that they brought home a historic feat for the nation,” said Biyo.

Biyo also commended the MSP for the marked improvements seen in recent years and expressed optimism that winning the first gold medal is “not farfetched.”

“We are getting there and hence the government will continue its support to these types of programs to ensure that we not only produce winners in the competitions but also in the real world where we need more scientists and engineers,” said Biyo.