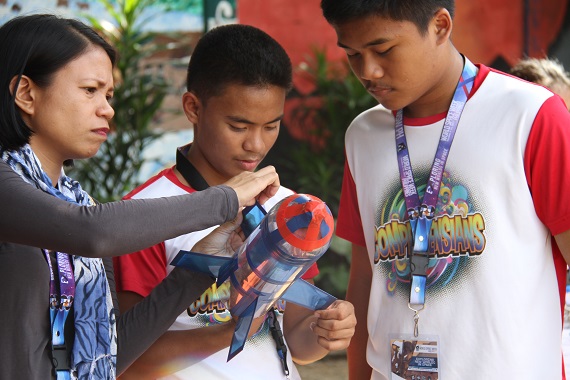 ALL ABOUT THE DESIGN AND STRATEGY. Water Rocket participants plan how they will go about their launch.

The first World Space Week celebration outside Luzon proved to be a worthwhile endeavor as the Department of Science and Technology – Science Education Institute (DOST-SEI) discovered emerging scientific minds in the Visayas.

Young Cebuanos feasted on fun-filled activities such as the National Water Rocket Competition, the 2017-2018 Asian Try Zero G Program, and the On-the-Spot Poster Making Contest, all conducted last 4-5 October 2017 at the Cebu Parklane International Hotel and Labangon Elementary School. The activities were a nod to this year’s celebration theme, “Exploring New Worlds in Space”. 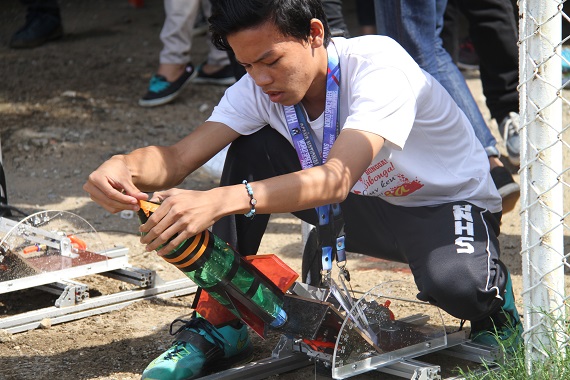 TESTING THE WATER ROCKET. A contestant setting up his team’s water rocket for launch.

In the annual Water Rocket Competition, Naga National High School’s trio of Ian Kenneth Buca, Nico Anthony Tejano, and Kishi Dy topped 14 other teams by tallying an impressive 4.1 meters from the target. The win slots them as the Philippine representative to the Water Rocket Event at the 24th Asia-Pacific Regional Space Agency Forum (APRSAF-24) to be held in Bengaluru, India, on November 14-17, 2017.

The water rocket competition aims to teach students the physics behind launching rockets in space through a fun yet competitive platform. Students are to launch their water rockets made of 1.5 liter soda bottles towards a target that was placed 80 meters away. The contestants need to consider water and air pressures in aiming for the target. The rocket landing nearest to the mark is hailed the winner. 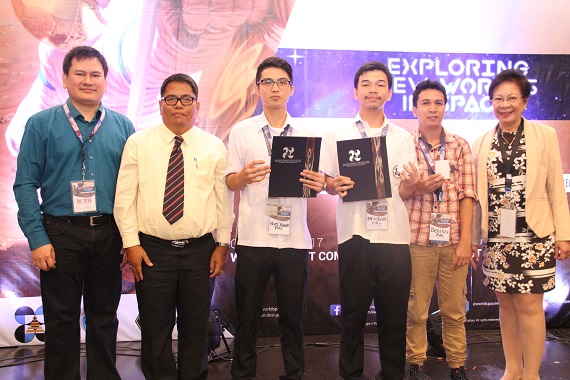 Another highlight of the celebration was the announcement of selected experiment ideas to the 2017-2018 Asian Try Zero G program, an educational activity organized by the Kibo-ABC of the Japan Aerospace Exploration Agency (JAXA). Eight experiments out of 169 submissions from all over Asia were selected to be performed in zero gravity condition by JAXA astronauts onboard the International Space Station. Two of the selected proposals were from Filipino students from Philippine Science High Schools’ (PSHS) Central Luzon and Central Visayas Campuses.

PSHS CLC’s Red James Catli Manalili, Jovelle Villanueva Adizas, Justin Gabriel Parel and their Team Leader, Keryll Bastien Santo Sison, presented an exceptional idea in their “Gyroscope and Tippe Top” experiment. It aims to know how a gyroscope will react when it is pressed in one direction while its center of gravity is altered with an additional weight, and to also observe the movement of the Tippe Top.

Present in the event were PSHS CVC students Brigham Lucero, Noel Xavier Fuentes, and their teacher, Benito Baje, whose proposal dubbed as “Principles of Density in Space” was also selected in the program. They talked about their experiement, which intends to test if a double ball using water and oil can be formed in micro-gravity condition. Lucero and Fuentes were recognized and given tokens during the program. 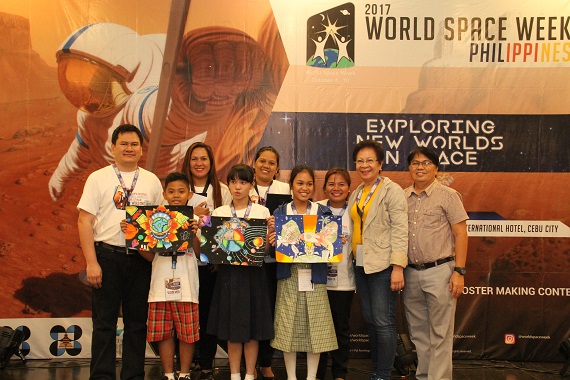 Completing the celebration was the annual On-the-spot Poster Making Contest where young scientists–artists showcased their talents in depicting the theme “United through Space.”

Yesha Alexandra Gocotano of Minglanilla Special Science Elementary School placed first with her creative space exploration artwork. Her winning entry will be sent to APRSAF-24 to vie against other entries in the region. 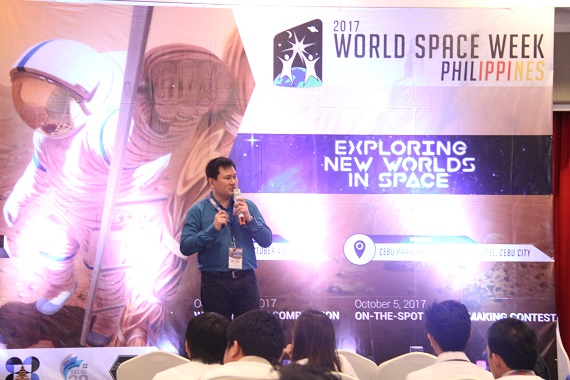 Filipino astrophysicist and Focal Person of the Philippine Space Science Education Program (PSSEP), Dr. Rogel Mari Sese, also provided participants with new insights about the applications of space science and the status of space development activities in the Philippines. Sese said that many Filipinos are unknowingly using space technologies everyday including smartphone apps like Waze, Uber or Grab, and therefore “space is not an unfamiliar territory for us.”

In a message, DOST-SEI Director Dr. Josette Biyo emphasized the importance of bringing the celebration to different parts of the country noting that Cebu was a perfect venue to boost the Institute’s efforts to reach more students as the city is home to a large number of schools and major universities offering science and technology courses. She said the event attempts to impart the value of space science, with hopes of encouraging young minds to pursue studies in the field.

“S&T is getting bigger and bigger and there’s no better place to be in than in this evolving field. We hope to see you soon in the science community,” said Biyo.

The World Space Week is an annual celebration done all over the globe to commemorate the contributions of space. The celebration in the country is being done under the PSSEP of the DOST-SEI. (30)