Realizing the importance of the merging field of big data and analytics, the Department of Science and Technology-Science Education Institute (DOST-SEI) with the Accelerated Science and Technology Human Resource Development Program – National Science Consortium (ASTHRDP-NSC) will convene its graduate scholars to discuss on big data’s potential in the country.

The annual ASTHRDP Graduate Scholars’ Conference, which will be held on 18-19 May 2018 at the Philippine International Convention Center (PICC) in Pasay City, hopes to provide a venue to continuing and new graduate scholars, scholar-graduates, and faculty members of the NSC member-universities under the ASTHRDP to get together, share research outputs, and collaborate with other participants. Now on its 7th year, the Conference adopted the theme, “Big Data for Big Science” emphasizing the recent trend of large data sets being analyzed to reveal patterns, trends, and associations, especially relating to human behavior and interactions.

Science Camp in Siquijor to raise awareness on climate change 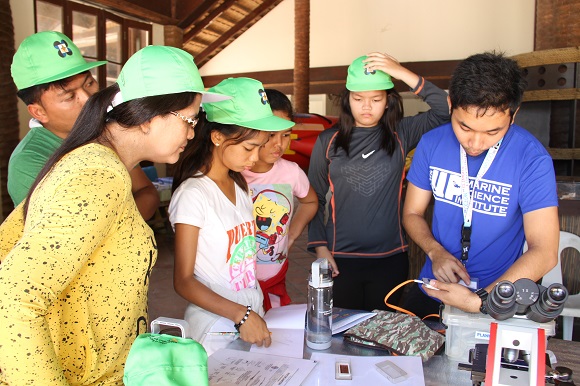 For most, the dry season or “summer” time is for art workshops and taekwondo lessons; but for students from various public schools in Siquijor, it’s all about the sea, the atmosphere, science, and saving the planet.

Forty students are about to experience becoming scientists in the 2018 Climate Science Youth Camp, a project organized annually by the Department of Science and Technology – Science Education Institute (DOST-SEI), which will run this year from April 17 to 22 in the island province.

The Science Camp is one of DOST-SEI’s most anticipated projects that aims to encourage the youth to get into Science, Technology, Engineering and Mathematics (STEM) courses. It is also one of the most effective platforms of the Institute as many of the camp’s previous participants are now enrolled in STEM fields while some are now DOST scholars.

Aside from the students, 20 teachers from different public schools in Regions VI and VII will also take part in the series of experiential learning activities about oceanography and climate science. 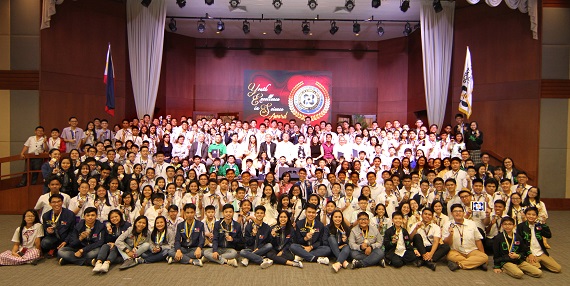 HISTORY MAKERS. The 2017 Youth Excellence in Science (YES) awardees pose for a group photo with DOST Secretary Fortunato de la Peña during the awarding ceremony at the PICC.

There’s no stopping our young math and science geniuses on their record-breaking trend.

When the Youth Excellence in Science (YES) Awards first started recognizing the victories of young students in international science and math competitions, there were only 70 awardees. Ten years after, the number of awardees reached a record-breaking 1,195 – an impressive 45.55 percent increase from the previous year’s already historic 821. It’s also the highest total since the event began in 2007.

“If the number of YES medals awarded is any indication of our future in science, I’m happy to say that it looks more than promising,” shares Dr. Josette Biyo, Director of the Department of Science and Technology – Science Education Institute (DOST-SEI) which organizes the YES Awards.

Biyo welcomed the 548 awardees from the national capital region and nearby regions in an awarding ceremony held on February 20 at the Philippine International Convention Center in Manila. The 647 student-medalists from other regions will be honored in separate events courtesy of DOST regional offices.

DOST scholarship at an all-time high with 8,994 new S&T scholars

Thousands of aspiring scientists and engineers will enter college with a Department of Science and Technology - Science Education Institute (DOST-SEI)  scholarship stamp.

The country’s premier science scholarship program, back after a two-year hiatus due to the implementation of the K-12 Curriculum, announced 8,994 new qualifiers for its RA 7687 and Merit Scholarship programs.

Out of the total number of passers, 5,172 qualified as scholars under the RA 7687 Scholarship Program, scholarships for gifted students who belong to economically disadvantaged families; while 3,822 passed under the DOST-SEI Merit Scholarship Program (Click here to view the list of qualifiers).

It’s a record-breaking year for DOST-SEI as the number of qualified students reached the highest mark since the scholarship program started in 1958, surpassing 2015’s 5,303 qualifiers by 69.60 percent. The 2018 DOST-SEI Scholarships Examination, which was held on October 15, 2017 in 216 test centers nationwide, recorded the highest number of examinees with 46,434 students. 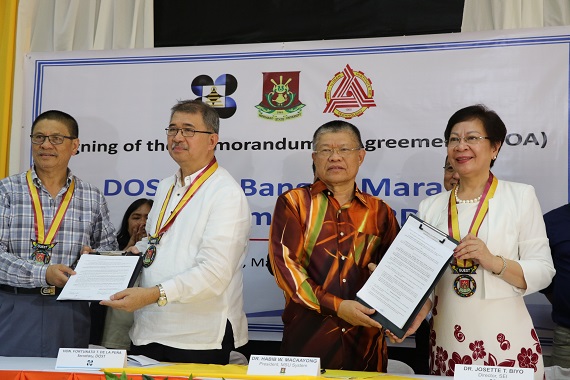 Helping Marawi rebuild. DOST Secretary Fortunato de la Peña leads in the signing of the memorandum of agreement with MSU System President, Dr. Habib W. Macaayong (second to right), and MSU-IIT Chancellor, Dr. Sukarno D. Tanggo (leftmost), for the implementation of the DOST Bangon Marawi Program in Science and Technology Human Resource Development, which will provide scholarships to students enrolled in STEM courses who were affected by the Marawi siege. The ceremony was held last January 26 in Iligan City.

When Nestor Acala decided to head back home to Marawi after completing his Doctorate in Mathematics as a scholar of the Department of Science and Technology (DOST), he was full of hope for his would-be students at the Mindanao State University (MSU) – Marawi Campus.

However, the siege that began in May of 2017 and lasted five months left severe damages that have taken aback thousands of lives in the area. Acala and his students, for one, had to put their respective growths on hold at the onset of the war. What was supposed to be a time for moving up turned into chaos in an instant.

The war is over and the rebuilding begins for Acala and his people.  Thankfully, the government’s Bangon Marawi Comprehensive Recovery, Reconstruction and Rehabilitation Program is going full swing to help rehabilitate infrastructures and restore peace and order in the city. In support of this national program, DOST through the Science Education Institute (SEI) is initiating DOST Bangon Marawi Program in Science and Technology Human Resource Development (STHRD) as an educational assistance strategy for students affected by the conflict.