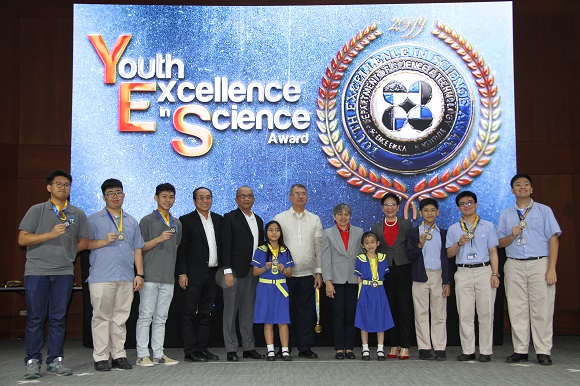 2018 Youth Excellence in Science (YES) awardees in a group photo with DOST Secretary Fortunato Dela Peña (center) and DOST officials during the awarding ceremony at the PICC.

Around 700 young achievers in science and mathematics gathered at the Philippine International Convention Center in Pasay City on February 14, 2019, for the annual Youth Excellence in Science (YES) Award.

In her welcome remarks, DOST-SEI Director Josette Biyo thanked the awardees for reminding the world of the excellence and hard work of Filipinos.

“We hope you can be our scholars and be with the people as you reach your dreams,” she added.

YES awardee Emmanuel Osbert Cajayon of Emilio Aguinaldo College-Cavite expressed gratitude to DOST and shared his experiences and reflections in his student’s response speech. The IMO bronze medalist reminded his fellow awardees to focus on their passion for their chosen field and not just on achievements.

The YES Award is now on its 11th year, with each year showing a steady increase in the total number of awardees. From recognizing 70 student-medalists on its first year, 2018’s total number is 1,469 (from 332 schools) – the highest number recorded in YES history and a huge 23 percent increase from the previous year’s 1,195.

During the ceremony, 730 students from 120 schools in the National Capital Region were given the Secretary’s Medal which signifies DOST’s high regard for excellence and competitiveness.

Dela Peña emphasized that the increasing trend is more than an upsurge in numbers. “What we are more interested in is the quality that we elicit among our students as well as the values we taught them during training, during the actual competitions, and after reaching the goal,” he added.