A hands-free computer interface with a built-in medical scanner, a living computer-monitored wastewater filtering and management system, and a smart assistant for the visually impaired—all invented by Filipino teenagers. These are just the highlights of dozens of inventions submitted from schools all across the country to the recently-concluded fourth annual imake.wemake: create. innovate. collaborate competition.

Organized by the Department of Science and Technology – Science Education Institute (DOST-SEI) with support from the Gokongwei Brothers Foundation (GBF), the contest was overseen by a rigorous team of judges comprised of veteran engineers from the country’s top universities.

“This year’s entries highlight the brilliance and creativity of our young students,” said DOST-SEI Director Josette Biyo. “It’s a feat made all the more impressive by the fact that they were able to create, innovate, and collaborate despite the pandemic.”

“We hope that these initiatives help ensure a pool of quality STEM professionals who can contribute to the Philippines’ national development in the future,” said GBF Executive Director Grace Colet.

Cavite Science Integrated School’s winning entry is a hands-free computer interface that also doubles as a warning device that monitors the health of its users. It helps to minimize the risk of infection from contact with infected surfaces by using
a computer-enabled camera to interpret users’ movements to potentially control everything from house appliances to ATMs. It also monitors users’ vital signs and is capable of sending an alert to authorities if it senses anything out of the ordinary. The winning project was submitted under the title, “ABSCISSA: An Arduino-Based Smart Contactless Interface Integrated with Syndromic Surveillance and Alert System for Fomite-Mediated Transmission Mitigation.”

Ramon Teves Pastor Memorial-Dumaguete Science High School came up with a unique wastewater management system that uses live plants to filter out harmful chemicals in water that would otherewise be flushed down the drain. The water passes through a biofilter of Tangan-tangan (Ricinus communis) plants, which naturally absorb toxic chemicals, before it goes through a standard filter setup. The whole process is carefully overseen via computer-enabled sensors that constantly monitor the water quality. The entry was entitled, “Project WWW: A Multifunctional Waste-Water Web for Agrobotics.”

The Science and Technology Education Center – Cebu Senior High School’s winning entry was a smart assistant that helps visually impaired users to know what’s around them and even to read nearby signs and text. The head-mounted device not only alerts of the presence of nearby obstacles but also indicates the distance of these objects. The system can also identify and read aloud text in the environment, such as on street signs and billboards. The project was called “Project BlindSpot: Arduino-Based Object Distance Measurement, Identification and Optical Character Recognition Using YOLO Algorithm.”

The YIP Awardees each bagged a Php 200,000 cash prize and a trophy.

The award is bestowed by the GBF to the finalists who demonstrated global competence through their innovation. The awardees also received the GBF STEM Scholarship for Excellence—a conditional scholarship amounting to Php 85,000 per academic year—which allows them to pursue a STEM course of their choice at any of the country’s colleges or universities. 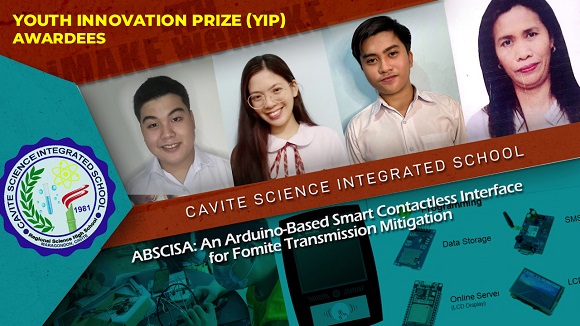 Cavite Science Integrated School’s winning design for a contactless appliance interface that doubles as a health monitor aims to help avoid the spread of COVID-19. 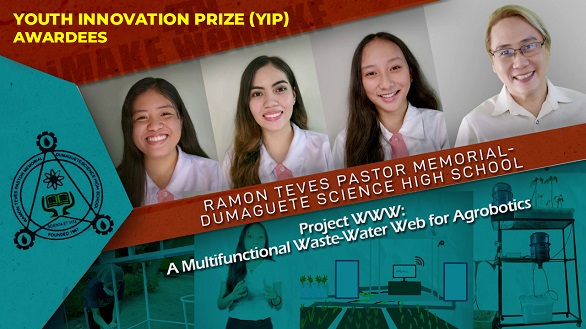 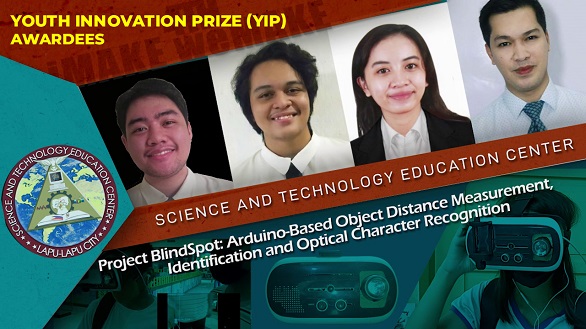 Science and Technology Education Center - Cebu Senior High School designed a head mounted assistive device for the visually impaired, allowing them to be alerted to nearby obstacles and even to read signs and billboards.